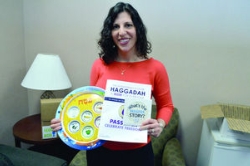 Seder in a Box is a hit!
An article about an innovative offering from the Jewish Federation of Cleveland and the Jewish Education Center of Cleveland.
Seder in a Box is a hit.
The response to that innovative offering far exceeded what the Jewish Federation of Cleveland and the Jewish Education Center of Cleveland anticipated, said Rabbi Melinda M. Mersack, who runs the program.
Seder in a Box is a starter kit for interfaith families who want to participate in the holiday, Mersack said in a recent interview at the education center in Cleveland Heights. Unveiled this winter, the program was expected to generate 100 requests. It generated 270.
The boxes, which contain seder plates, hagaddahs, Passover recipes, leadership tips, interactive games, an Elijah’s cup and Passover guides for families, are distributed through jHUB, the Cleveland affiliate of interfaithfamily.com. That website is a virtual gathering place for interfaith families seeking more comfort with and knowledge of Jewish life. Connection is key to jHUB, Mersack said.
To Ayla Rosenberg of Orange, set to be married in a few months to an Army colonel who isn’t Jewish, the Seder in a Box will help her husband-to-be understand what Passover is about.
“I grew up very Conservative,” said Rosenberg. “I’m very familiar with the holidays. I thought it would be a nice starter for him to understand what the holiday’s about instead of me just telling him. He’s interested in it himself, and I thought it would be an interesting good thing to bring into our home as his first time having this holiday.”
To Meredith Miller of Avon Lake, Seder in a Box exemplifies outreach, not just religious but also geographical. Miller, who moved to the Cleveland area from New York City, for the past 10 years has been married to George Mestre, a Catholic.
“I wanted to see what was being offered in it,” Miller said. “They’re publishing it and making it available to West Siders for the first time. This is the first time in 11 years that anything has been available.”
For the past four or five years she’s been traveling to Beachwood for Jewish programs, but she just “found” Temple B’nai Abraham in the Elyria, where she’s helping with children’s programming. Her children are being raised Jewish.
The family has been celebrating Passover for the past few years in Beachwood, she said, adding she wants to be a leader of a seder instead of just an attendee and is looking for teaching tools in Seder in a Box.
The traditional hagaddah may be the biggest challenge for an interfaith family, she said, adding she hopes the one in the Seder in a Box is more accessible.
“Things have been so temple-based in Cleveland, and the interfaith family network with Rabbi Mersack is incredibly welcoming and filling such a void in my personal situation,” she said. “It doesn’t matter what your income is, what your family situation is, whether your were brought up Reform, Conservative or Orthodox.”
Mersack and Marlyn Jaffe came up with the name of jHUB, conceiving it as a “central place for interfaith families to come and connect with each other,” she said. The idea for jHUB came out of the Federation's strategic plan and its marketing department has offered significant support, Mersack added.
“It may be connecting them with Jewish programs that already exist, if that’s what the family wants; sometimes it’s clergy referral – I’ll meet with people who are looking for Jewish clergy to officiate at lifecycle events.” Mersack also creates programming, like Seder in a Box.
There are about 24,000 members of interfaith families in Greater Cleveland representing some 10,000 households. The trend is growing – all over.
Many couples tell her they would “like to meet with other interfaith couples to have a safe, confidential, nonjudgmental place to meet to discuss issues unique to them, like how do we navigate the holidays Passover and Easter, Chanukah and Christmas? How do I explain our choices to our parents or my in laws and my children?
“The couples are very thoughtful about religion and about seeking meaning for their families and they’re looking within a Jewish framework. They also may be looking in other frameworks, as they want to be respectful to the full heritage of their family.
“All of the clergy and all of the Jewish professionals I have met with want to be truly welcoming and inclusive of interfaith families,” Mersack said. “Part of my work is to help them be even better at that and to provide suggestions for how to do so, because we know that stepping foot into a synagogue may be difficult for some interfaith families. How can a synagogue remove that perceived barrier? What can they do to be more inviting?”
Posted: Thursday, April 2, 2015 12:15 pm from the Cleveland Jewish News
CARLO WOLFF | STAFF REPORTER
[email protected]
http://www.clevelandjewishnews.com/features/holidays/new-attempt-to-educate-interfaith-families-begins/article_9800cf64-d946-11e4-9bac-afee67a03816.html Source: Cleveland Jewish News
Print